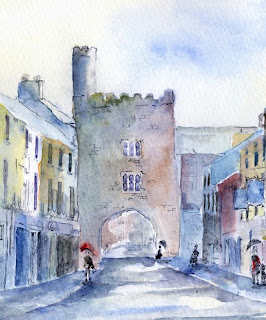 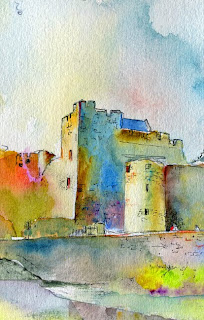 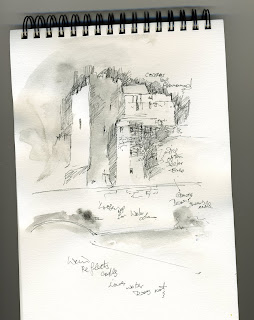 The O'Briens of Thomond fortified the site, in the century prior to the Norman invasion of 1169. The present structure is Norman and dates to the thirteenth and fifteenth centuries, with significant nineteenth century restoration of a sympathetic nature. The Butlers were granted the castle in 1375 and it remained almost continuously in there possession until 1961.
Posted by Ronnie Fitzgerald at 5:13 AM No comments: 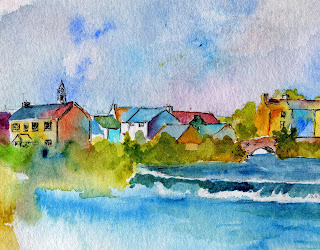 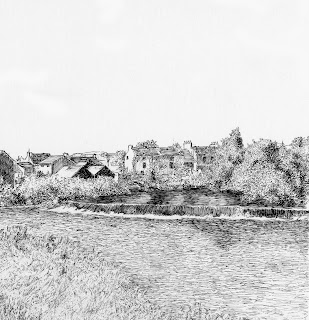 Lady Blessington's writings, however, were not enough to save her from bankruptcy, and she fled to Paris, where she died in 1849. Lady Blessington's Bath today commemorates the fame of one of the most colourful and vivacious figures from Clonmel's past.
Posted by Ronnie Fitzgerald at 1:31 PM No comments: 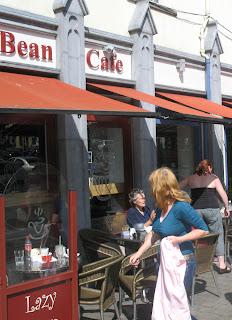 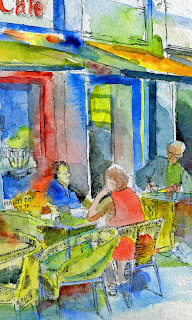 I am working on some sketches of people relaxing outside the Lazy Bean Cafe in Cahir. Some weeks ago I was in Cahir on a beautiful morning when the light was brilliant. I always find street scenes interesting especially in towns like Kilkenny or Cahir because of the amount of tourists that travel through. Like Kilkenny Cahir has a large Norman castle right in the centre of town. Yet when tourists come through the town and move away from the castle they find little cafes like the Lazy Bean with a character all of its own, and great coffee too.
Posted by Ronnie Fitzgerald at 1:13 AM No comments: 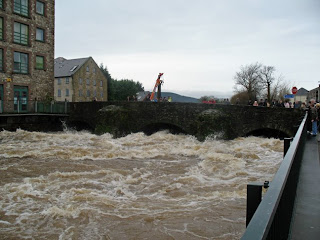 The light is not great this morning and I decided to work in the studio for a few hours. I have to complete a commission and have it ready for Tommy my framer in the morning. Usually on Sunday's I like to ride the bike somewhere and take a few photos but its grey overhead and its best to complete the work for Tommy. A lot of my work is based on the Landscape around the River Suir which runs through the valley where I live. Over the last few years flood walls are being built along the river in an attempt to control a problem that has increased and has made life for people in the lower areas a nightmare. The river has flooded many times over the last few years and in Clonmel and residents that live near have in some cases lost their homes and possessions. there have been many theories as to why the increase in flooding is happening, global warming, the removal of hundreds of acres of forest in the hills overlooking the town and the building boom that led to concrete everywhere.
As these flood walls are being built the landscape is changing. Places that were noted beauty spots are gouged up and changed. Equally new areas are being exposed I have sketched some of the new scenes along the river. People that emigrate always seem to take a traditional image of
home with them. This is especially true of people who were forced into emigration. I have met some visitors who were appalled by the changes that are happening and couldn't believe that the river scene that they kept in their minds abroad was gone forever.
Posted by Ronnie Fitzgerald at 2:09 PM No comments: 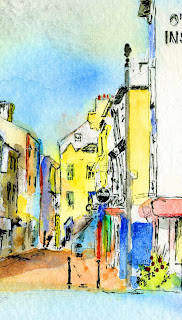 Went out early this morning needed to get some more visual information for new street scene. There was nobody around but the sun was bouncing off the buildings. I'm pleased with the way the work is going at the moment it has loosened up considerably since early in the year. Man was I uptight there for a few months. I started back into short periods of meditation early in the morning and I really believe this is helping. My concentration is still not the best and I find the mind wandering after a few minutes, but I'm going to keep at it because I know it works.
The street scene Mitchell Street is finished and is on the website. These two small images are details from the finished piece
Posted by Ronnie Fitzgerald at 6:51 AM No comments: 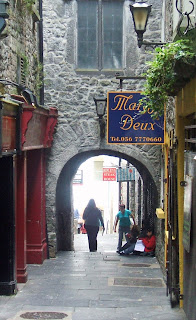 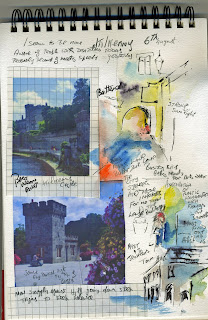 I travelled to Kilkenny yesterday to collect some visual info for a set of prints. On Tuesday I met an artist friend of mine who suffered a stroke last year it has left him with speech and mobility difficulties. Yesterday in the city I seemed to be more aware of the problems facing people with disabilities. I watched a young guy on a motorized wheelchair being blocked in by a driver, who showed no consideration for his plight. A man who had obviously suffered a stroke and walked with the aid of a stick was trying to negotiate his way down a steep hill in the town and keep his balance. His concentration was incredible.
I have decided to use my blog as a sketchbook it seems the way to go for me. I found the streets of Kilkenny more interesting than the monuments and the touristy things. The city is full of narrow lanes and archways like arteries leading to the centre.
Posted by Ronnie Fitzgerald at 11:21 PM No comments:

This is it I have never blogged before
Posted by Ronnie Fitzgerald at 2:08 AM 1 comment: